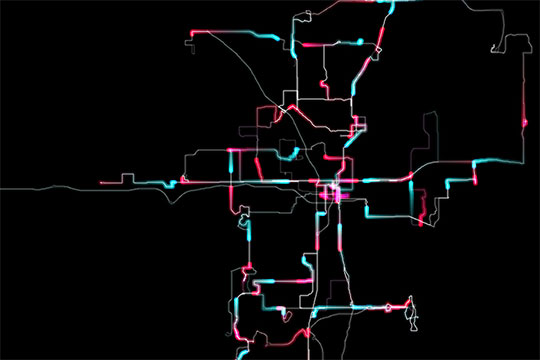 Created during a residency with the Transit Interpretation Project (TrIP), this seamlessly looping video installation animates buses according to their schedule, as small blue and red circles with fading trails, in a sped up 24 hour cycle typical of a weekday here in Central Florida.

The title is a play off of Richard Reep’s excellent TrIP post, Searching for the soul of the tropical city, where he writes about LYNX Central Station, “The heartchamber of the city, the place where all the blood condenses and is forced through valves into the arteries and veins of the town.”

There’s also a tie-in to duplex ultrasonography, a form of medical imaging which I have recently encountered due to some family medical issues. “Grayscale Ultrasound [is used] to visualize the structure or architecture of the body part… Color-doppler Ultrasound to visualize the flow or movement of a structure, typically… to image blood within an artery… Both displays are presented on the same screen (‘duplex’) to facilitate interpretation.” The outgoing buses are colored red, as if they were the oxygenated blood in the arteries, and the incoming buses are colored blue, as if they were the oxygen-poor blood coming back to the heart via the veins.

TrIP shows humans of Orlando at Gallery at Avalon Island